It was a drive I had made countless times in my life, though it had been a few ye

Green Lake, is a conference area located in Central Wisconsin, located on the shores of Green Lake, near the town of the same name.  It’s official name is Green Lake Conference Center (we knew it as The American Baptist Assembly Grounds), to us, it was just Green Lake. As we drove down the main road, through the dappled sunlight, many of the changes since our last visit several years ago became apparent. Later, as we walked around the grounds, familiar spots seemed like shadows of days gone by. 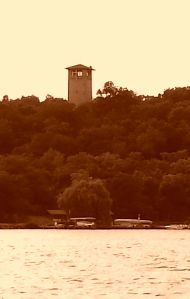 My brothers and sister and I grew up here, spending every summer vacation for years with our parents. We didn’t know until many years later the only reason we could even afford to stay at Green Lake was that my dad was actually working at the conferences. We were oblivious! In our younger days, we would spend our mornings (and parts of the afternoon) in the children’s programs, graduating from “door to door” each year. (Think vacation bible school with each age group in a different house, with a different color door). The afternoon’s activities included swimming, hiking, crafts and sports.

In the 60’s and early 70’s, Green Lake was a different place. It was bustling with activity. Hundreds of visitors each week. The front gate was manned by a guard, only allowing in the registered conference attendees, those there to play golf on the championship golf course, employees and a handful of folks that lived on the grounds. As children, it was safe for us to roam across the entire place. At night, our favorite activity was “deer hunting”. This involved piling four kids into a car, keeping them quiet, as my dad drove slowly through the overgrown gravel roads deep in the woods looking for deer. We would keep track each night of how many we spied.

As we grew older, we were able to explore more and more of the grounds on our own. As the years went by, my older brother and sister got summer jobs, graduated high school and no longer vacationed with us. My younger brother and I continued to anticipate our annual excursions. Together we explored, roamed the grounds, made friends with other kids attending (especially, the cute girls-made it to second base for the first time at the top of one of the water towers on the property!), and wreacked the typical havoc of two teenage boys.

Somewhere during this time, we got word they we adding an additional 9 holes to the golf course. You see the conference center was struggling to make ends meet and the revenue generated by the course was key to keeping it afloat. Not being a golfer at the time, we were devastated! How many acres of our beautiful woods would be devoured by 9 holes of golf? Gone was Quarry Road, gone was Tower Road. All for a stupid game?

Fast forward a few years, we were now grown, married, and had kids of our own. Being a young financially struggling family, we could not afford to go on vacation. When my parents invited us to join them at Green Lake for a week, we jumped at the chance. Soon, the annual trek was reignited. Each year mom and dad, all the siblings and their families would descend upon the hallowed grounds. At first, we all stayed in the same house. As our families grew, some of us would rent cabins, or stay in the camp grounds, but we would always spend time together throughout the week hiking, running, eating, and playing games.

Mom would relish in the game of posing the JT and Brad’s stuffed animals while they were at the Children’s Center. It became quite a game to guess what Mimi had done with them now as we walked back to the cabin. That Pooh had many great adventures: playing board games, washing dishes, grilling out, watching TV, and playing tennis!

During this time, we were to learn some well-kept secrets of parenthood (JT, Brad, Jeff, Ross and Kyle you cannot read this part until YOU visit Green Lake with YOUR children, so just skip to the next paragraph). Secret #1 – Vacationing at a locale with a Children’s Center with lots of activities for kids ROCKS for the parents too! Parental down time! Secret #2 – When hunting for deer, it is not necessary to be as quiet as church mice, but how else are you going to get four kids to stay quiet for an hour?

We also discovered another secret – town! Yes, there was life away from the conference center. Before long, our annual treks had to include a meal or two at the Goose Blind Bar and Grill and Pizza Hut. We also included tours of the Rippin’ Good Cookies factory, the Amish bakeries and the various antique shops in the area. Who knew?!!?

Green Lake announced plans to, once again, expand the Golf Course. We were disappointed to hear more of our dear woodlands would be plowed under, however, since I had taken up the game and Brad was learning to play as well, we were excited (with a tinge of guilt) to play the new nine. Soon, “The Woodlands” would become our favorite of the two courses on the grounds.

By now, life had changed yet again and the annual trek fell by the wayside. Green Lake, always living from “paycheck to paycheck” was experiencing financially tough times. They began

to sell more and more lots to private owners. It seems lake front property could garner a very high price! Our parents were now retired and spent three months a year volunteering at the Conference Center. They purchased a modest mobile home and leased a spot in one of the mobile home parks on the property. Carmen and I made it point to drive up to visit, if even for a long weekend, many summers while they were there. For a time, we had a motor home (Clark, that there is an RRRR.V.!) and we would stay “right next door” in the extended lot they had leased.

As mom and dad grew older, they decided to give up the trailer at Green Lake and sell it. During our final trip to visit, we learned the Conference Center was selling off the largest section of woodlands yet to a developer who would be building million dollar homes on the property, even the east gate would be removed to allow the homeowners easier access to the grounds and their homes.

Shadows of days gone by…memories of simpler times…a lifetime (five lifetimes actually) of memories. There are still parts of the grounds that remain. The grand hotel, Roger Williams Inn; Judson Tower standing guard; the boat house with it’s marina and docks; some of the cabins and houses; all can still be found. Call it the world we live in today, call it progress, call it competition for our attention and entertainment, call it what you will. I found myself saddened to walk the grounds and see the shadows. Much of what I remembered is “just ‘living memory’ that sadly no longer exists”.

Expanding your circles on Google+?

Read more of my musings on LinkedIn.

Interested in IT and it’s role in business? Check out my posts on Intel’s IT Peer Network.

I Saw My Father…

Can you be friends with the people that work for you?

Welcome to the World

The Land of Serendip Revisited

My Mother was a Jesus Freak!

The Land of Serendip – The Final Chapter
23 replies

Wow, are those smiles identical, or what?!
Scroll to top