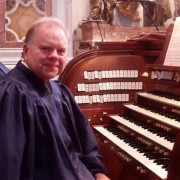 Mark as an organist. A church organist. He brought his gift to thousands around the world. Words cannot describe the majesty of his music. I urge you to listen to some of his performances on YouTube.

If Mark had played rock ‘n roll, he would have been known as a “keyboardist”. With no disrespect to Elton John, Billy Joel or the late Keith Emerson, that label diminishes the enormous talent God had given Mark. Whenever Mark played the organ, the congregation would come early to hear the prelude. After the service, they would sit in the pews until the last notes of the postlude echoed throughout the sanctuary.

Mark was an organist. A church organist…and so much more. Mark came to our church in the early 70’s to be the organist. When the Minister of Music left, Mark took over those duties as well and truly began his ministry. The music became an integral part of the service. He would work with my dad (the minister) to really understand the message he wanted to convey on Sunday and deeply tie the music to that message.

Mark brought a bright sense of humor with him as well. Member of the choir having a birthday? Aren’t those notes of “Happy Birthday” subtly being played underneath the melody of the offertory? “The Bringing of the Tithes” Sunday in November? I swear I hear the tones of “If I Were a Rich Man” from Fiddler on the Roof!

As Mark expanded his ministry, he resurrected the youth choir and started a youth handbell choir. The bell choir became known across the state. We were a ROCKING bell choir. I don’t mean we played rock music (other than Tubular Bells, I can’t imagine bells in rock music), I mean we ROCKED it! He was able to take us all as a group further than we ever imagined. The complexities of some of the pieces we played required some of us to play four, five, six and more bells in a given song. We were GOOD…because Mark taught us to accept nothing less than perfection.

The world will forever remember Mark for the music he made through his own fingers and feet and through the voices, hands, and instruments of those he led. Me? I will always remember Mark for what he did for me. As a young pimple-faced teenager of 17 or 18 he took me seriously. He took my dream of music seriously when few others did. All I ever wanted to do when I grew up was be a rock star.

During the 70’s I was deeply moved by the Broadway Rock Opera “Jesus Christ Superstar”. So moved, I wrote the sequel. After writing the lyrics to 20 or so songs and plinking out the melodies on guitar, I nervously shared it with Mark. To my amazement, he did not laugh. He did not make fun of me. What he did do, was spend hours and hours meeting me before Bell Choir practice and helping me write the music. When Mark took my melodies and played them, it was magical. He made those silly little songs sound REAL!

As I prepared to graduate high school, I turned my attention to college. I enrolled at Indiana State to major in Music Theory & Composition. I submitted my rock opera as part of my portfolio of work. About six weeks before school was to start I learned that even in Music Theory & Composition one must declare an instrument…oh, and rock guitar did not count (uh, nor did classical guitar). I was crushed! But, there was Mark.

Mark found an accelerated piano curriculum for adults and for the next six weeks we met several evenings a week. Mark taught me to play. He taught me to play well enough to actually audition…and to pass. I was given provisional acceptance into the school of Music.

For a variety of reasons (mostly because I had no talent) my career in rock and roll never materialized. What was born in me through Mark was a lifelong love of music, a dedication to lifelong learning and the dare to dream. Last summer, Carmen and I, along with our friends Hal and Beth Bloss, had a chance to reconnect with Mark for lunch. With tears swelling in my eyes, I was able to tell him what he meant to that pimple-faced teenager and what he means to a somewhat older and grayer grandfather today.

Jeff blogs on a variety of platforms: